One of the Appendilooza clan is in trouble.

Randy Furlong’s signet ring cell appendix cancer is back (he even had HIPEC!) and he’s been fighting it AGAIN with chemo for a good portion of 2012 and now 2013.  After the additional chemo didn’t stop the web-like tumors in his peritoneal cavity, his surgeon confirmed that additional surgery would not be helpful either. So Randy tried an experimental 3-chemo cocktail that, unfortunately, didn’t work.  After a couple of weeks in the hospital, Randy was moved to hospice. Now his family is honoring his wishes to spend his days at home during this final stage of appendix cancer.

I have been fortunate to visit with him twice for a short time in hospice and at home in the past two weeks. It’s been rough watching this happen to a wonderful, gentle, smart man with a dry wit and sense of humor that makes me laugh and laugh.  We have visited every time I go to Houston for my check-ups since we met in early 2011.

Randy is a theoretical high-energy particle physicist, patent lawyer, mathematician (has Pi memorized to over 1800 digits!),  “who is married to the most wonderful woman in the entire Multiverse” and proposer of Furlong’s Conjecture regarding twin prime numbers.  He’d love to win the Nobel Prize in Physics someday.  Check out his entertaining blog at 201.168 meters (exactly the length of one “furlong”).  He is such a beautiful force on this planet!

Randy’s wish is to spend his last days at home. But with that comes the high cost of round-the clock nursing expenses which exceed $400/day and this is not paid for by insurance.  His 80+ yr. old parents are using their “nest egg” to pay for the care that Randy needs and they have no issues with using up every penny, but it will only go so far.  So, if you are so inclined, here is the gofundme.com site set-up to defray his expenses while at home. I don’t make it a habit to solicit donations, but Randy, his wife and his parents (former MD Anderson researchers) are near and dear to my heart.

Thank you for considering making a contribution! 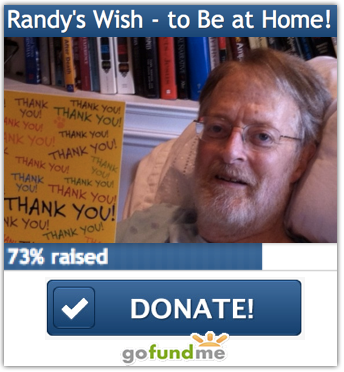