For those of you keeping track at home, you might remember that I completed 23 weeks of chemo last year with a two-month “holiday” break for surgery and recovery in November and December. Then in January, my chemo regimen was extended for another six treatments over 3 months which makes a total of 29 chemo treatments by the time I’m done.

I’m proud to announce that this past week I completed the third of the additional six treatments. Only three more to go, every other week. (This coming Tuesday, I start the fourth). The finish line  is Thursday, March 24, 2011.

These six additional treatments are considered “adjuvant” therapy. This refers to treatment usually given after surgery where all detectable disease has been removed but where there remains a statistical risk of relapse. Last year’s 23 weeks of chemo was considered “neoadjuvant,” or the chemo given prior to the main treatment for the disease. In my case, the main treatment was my big surgery on Nov. 30th to remove the tumor and any other cancer spots.

My current chemo, FOLFOX chemo without the OX (oxaliplatin), is much milder. With the oxaliplatin gone, it’s just the 5-FU (a chemo drug – fluoruracil) and leucovorin (a vitamin complex – folinic acid) now. Hey, would that be conisdered FOLF__? But these two need each other to effectively kill any cancer cells.

Here’s one way of explaining it: A unit of 5-FU is like a grenade. When the grenade strikes its target (the cancer cell), it explodes and shrapnel goes flying. The grenade already did its damage but the target may or may not be dead. Leucovorin is like a magic wind that scoops up the shrapnel from the ground, whirls it around, and smacks the target with it a second time. It’s basically a second attack that uses the leftovers from the first attack. Nice, warm analogy, but then beating cancer is referred to as a “fight.”

Physically, I’m getting along fairly well. These six extra chemo treatments are given every other week. The chemo week is a little rough but then I get rolling around the middle of the next week so I have one completely good week before I go back for chemo again. My biggest complaint is the aggravated neuropathy. My hands and feet are killing me. The only shoes that are comfortable are Danskos worn with thick socks. I love wearing them but they aren’t exactly fashionable or safe, in my case. I tend to fall off of the platform soles once in a while. Ha.

Mentally, it’s been tougher than ever before which makes no sense. Before my surgery, I had nothing to lose and had everything to gain so focusing like a mad woman on beating this disease was all I could do. Now that “there is no evidence of disease,” I feel as if, potentially, I have everything to lose at my next scan. Not exactly positive thinking but these are real thoughts as I navigate through this mess. Glass half-empty analogies do not work here. This is uncharted territory for me.

But I know that I will pull through this weird time. As someone suggested to me the other day, “Imagine someone gives you a handful of rocks and asks you to hold them for a while. Instead of dumping them immediately because they are so heavy, go ahead and examine them. Feel their contours, examine the various shapes, look at their colors, feel their weight. Then, when you have finished examining them and are ready, you can put them down and move on.” A simple analogy for processing overwhelming emotions instead of denying them. 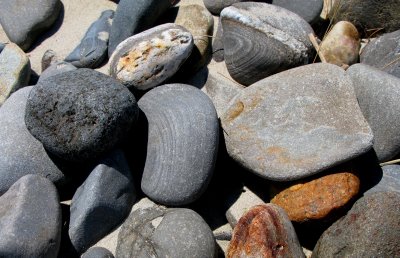 My next set of tests and CT scans are scheduled for April 17 and 18 at M.D. Anderson. These scans will be the first ones that we can compare to my new baseline CT scans taken in January. Hopefully, the upcoming scans will be VERY boring. I think boring is well-deserved.

7 thoughts on “Grenades and Rocks”